By Ivan SteniusJanuary 27, 2022Antarctica
No Comments

Saturday the 15th January was a long day with a lot of exciting deployments! A few CTD casts in the morning, 2 glider deployments in the afternoon, and after dinner our first RAN test mission!

Gliders are really cool instruments! Prior to deployment, they receive a set of waypoints. Once deployed, they are quite autonomous, diving up and down the ocean according to the set waypoints. Once they reach the surface, their antenna will communicate with satellites, transmit the dive data, receive any changes from the remote pilots and then continue with its mission. 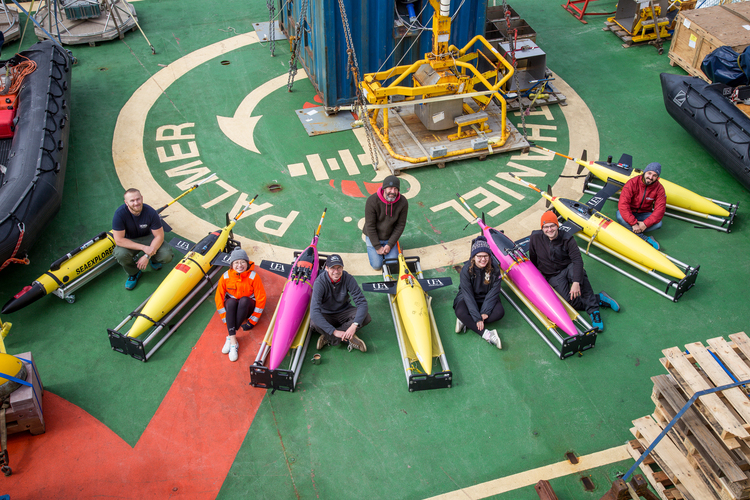 After dinner it was our turn to perform the first RAN test mission!
Exciting! Anders and Mark were out on the back deck in the RAN container, Anna was in the Dry Lab with the Hugin computers, and I went with the zodiac to see the deployment from a distance!

Hugin deployment seen from the zodiac:

There was a bit of a hiccup during the first mission. RAN was a bit too heavy and sank before we had time to tell her to move to line 2 with her mission. So she disappeared when she was still executing line 1 of her mission, which was staying in surface for 40 minutes. Effectively, she ended up sinking for 40 minutes 😂😱 But then she did an emergency ascend when she started executing line 2 and realized that her expected depth

(0m) and actual depth (350m) did not match! Lars from the seal tagging team was kind enough to help us spot her in the water ~1km away from the ship, and the bridge was super helpful maneuvering towards her. Two of the MTs Ken and Matt then went out in the zodiac to recover her. By this time, the sea was starting to get a bit more stormy and sea ice was starting to come closer to the ship. Many times, the recovery rope got stuck around a piece of sea ice. But the MTs always managed to maneuver around and get RAN on the right track again!