First real mission with RAN!!! Exciting!!! The mission is ~19h long outside the Dotson Ice Shelf. Due to global logistic issues, many of the things we shipped from Sweden never made it to the cruise, including a beacon that was supposed to be lowered onto the seafloor to help RAN position herself. To make the operation safer, we deployed RAN in relatively shallow water (~500m) so that her downward looking DVL will be able to track the seafloor relatively quickly (once it is within 200m to the seafloor).

During the 19h operation, some one need to monitor the Hugin computer screens to see whether RAN has sent us a satellite message. If yes, then she has done an ascend (either emergency ascend or ascend after the mission completion) and we’ll need to go get her. I took the shift between 21pm and 4am during the night, so unfortunately I missed both the launch and the recovery…

More glider deployments during the day! During the evening ALR deployed as well! It’s really cool with so many autonomous vehicles onboard!

From the Hugin side, we’ve managed to download the data from RAN. The bathymetry in this region is “Crazy!” in the words of Mark, and we saw that RAN did some VERY steep pitch to follow the seafloor. So nice that she came back safely from the adventurous trip!!! The geologists (THOR) onboard were very excited of the high resolution bathymetry, and they’ll use it to pick their coring sites 😀 The upward looking ADCP managed to
get data from under the ice shelf, which is super exciting for all the oceanographers! 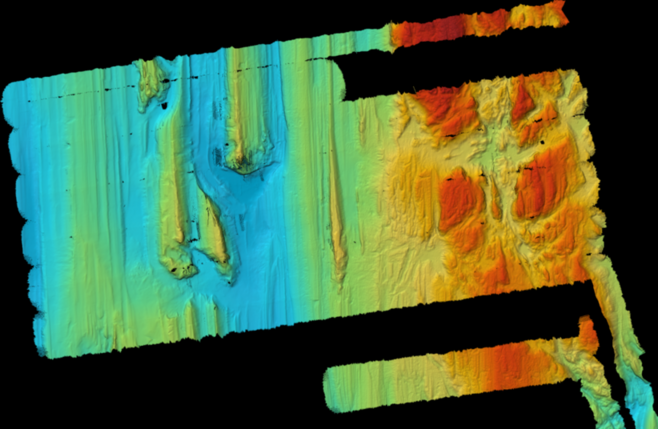 A section of the bathymetry from the mission (gridded at 3.5m)

RAN’s next trip will start tomorrow morning, and then she’ll traverse along the eastern side of the Dotson Ice Shelf! Look forward to seeing the data!

At around mid-night I went out for some fresh air. The view was stunning! We were so closed to the Dotson Ice Shelf (and will be staying around this region for quite a while)!