I stayed up until the RAN recovery time 11.30 this morning, since I was also a bit nervous for RAN… After all, it’s the first mission where she leaves the seafloor and tries to go up closer to the bottom side of the Dotson Ice Shelf! Anna has previously tested RAN on under ice mission last February, but then it was under Gothenburg’s thin sea ice… A no-one-is-really-sure-how-thick ice shelf is… I guess… Some what a different challenge.

Luckily, RAN surfaced only around 10 minutes late from her originally computed mission end time! So, we can call the first closed-to-ice mission a success!

This is probably a good time to introduce the recovery strategy for RAN. Once RAN surfaces, the nose cone is released, exposing a ~40m wire that connects the nose cone and the RAN vehicle body.

Once the starboard side of the ship is aligned with RAN and we are closed enough, we will throw a grapple hook to try to catch the 40m wire. 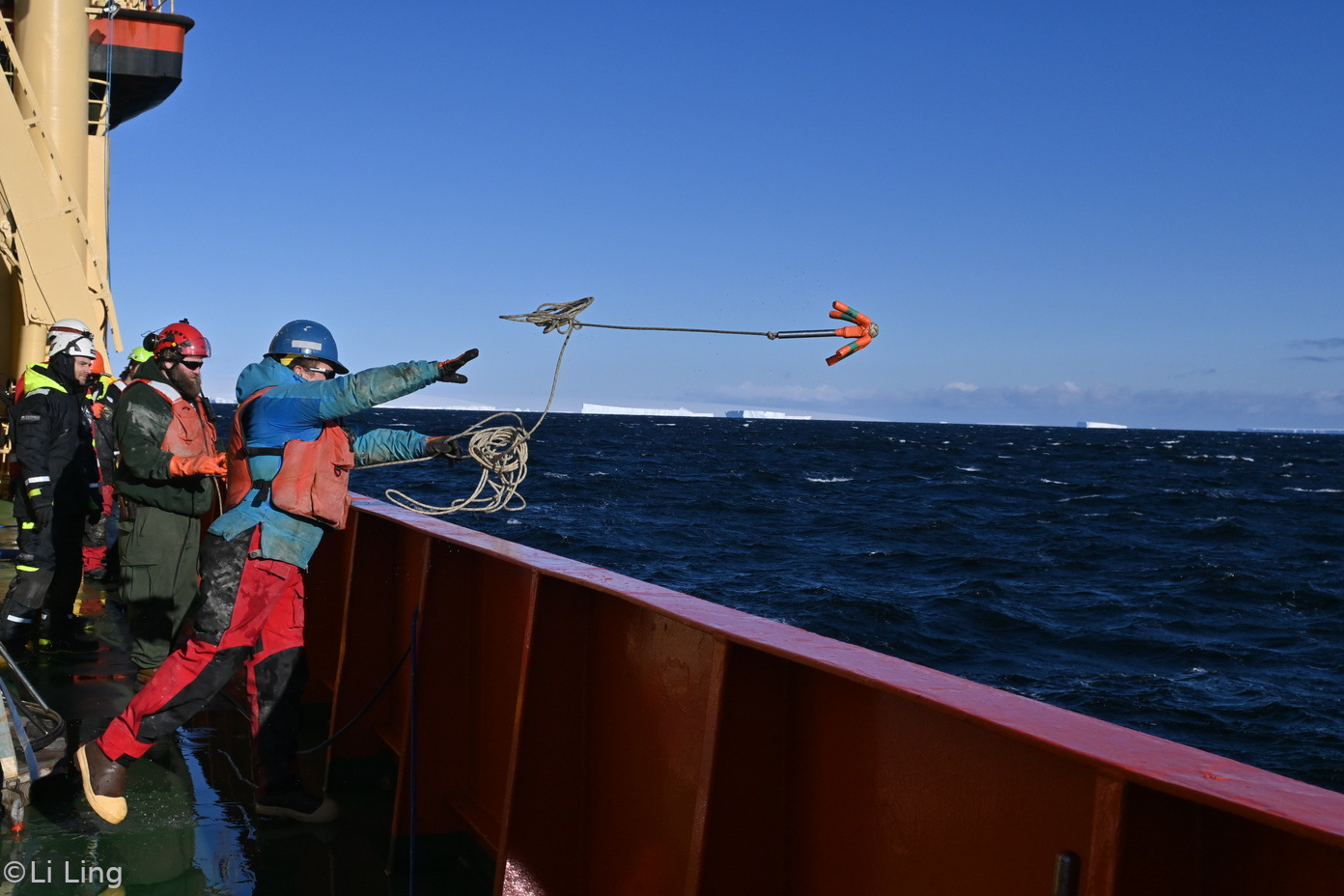 When the hook is attached to the wire, we can simply use it to pull up the nose cone, and then use the wire from the nose cone to maneuver RAN back to the extended LARS. 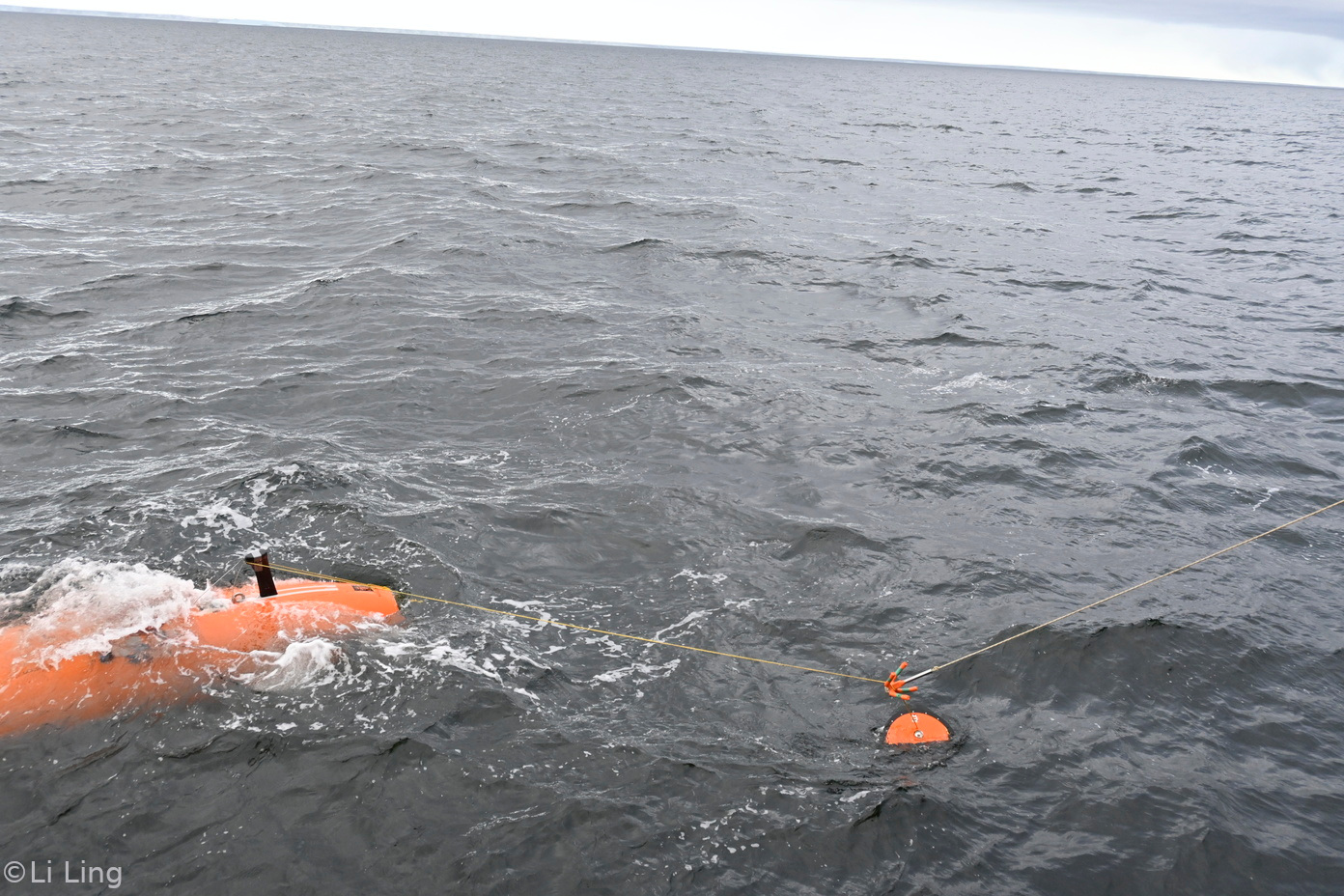 However… Being the first time testing the water samplers, we only managed to fill one bottle of ~120ml

We suspect that it was because we did not put in the “stop water sampling” command in the Hugin mission, so hopefully better luck next time with more water!

Although only 120ml, the water collected was treated as a real treasure… 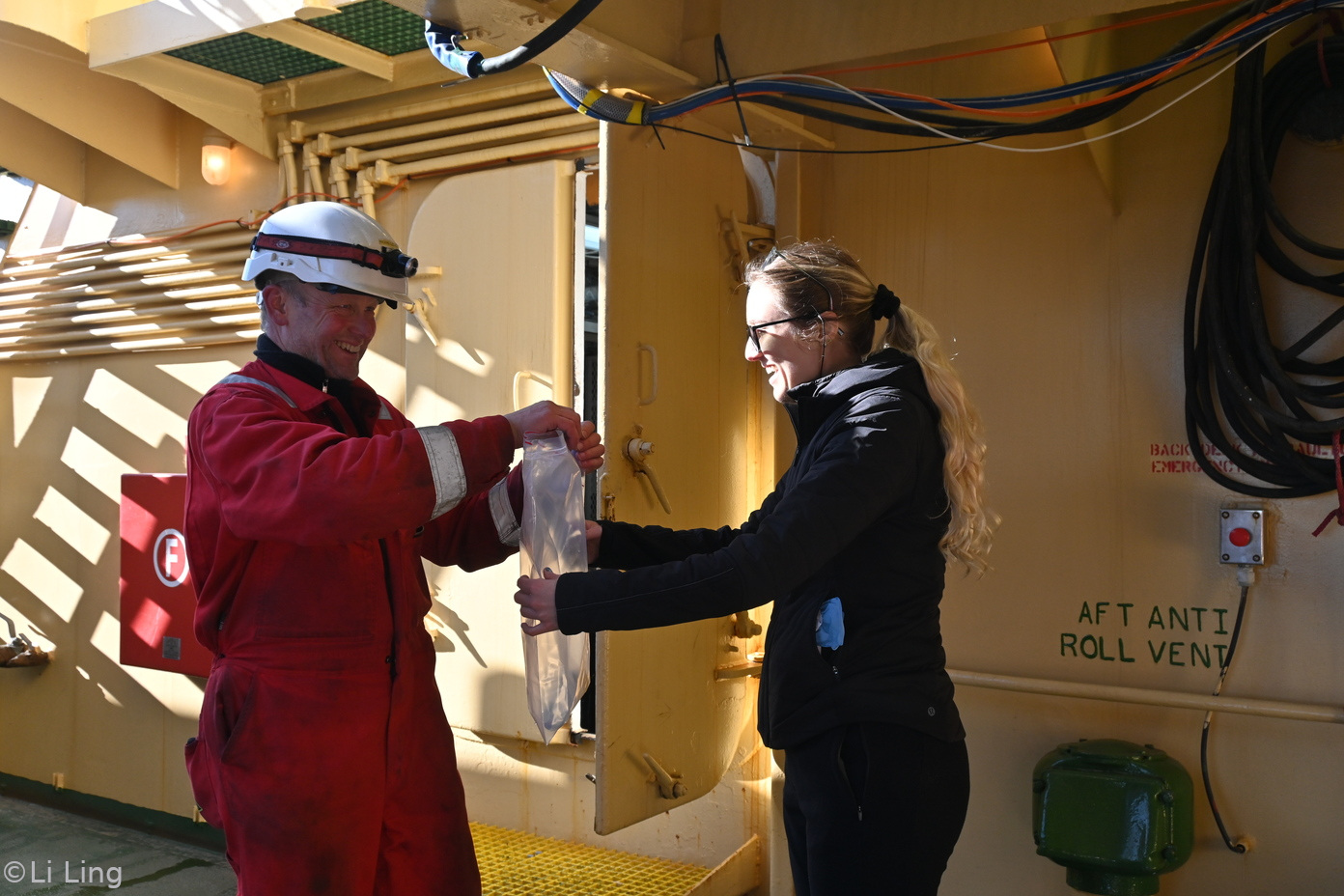 Anders handing over the single filled water sample to Laura, who samples noble gases from sea water to determine the characteristics of the water masses 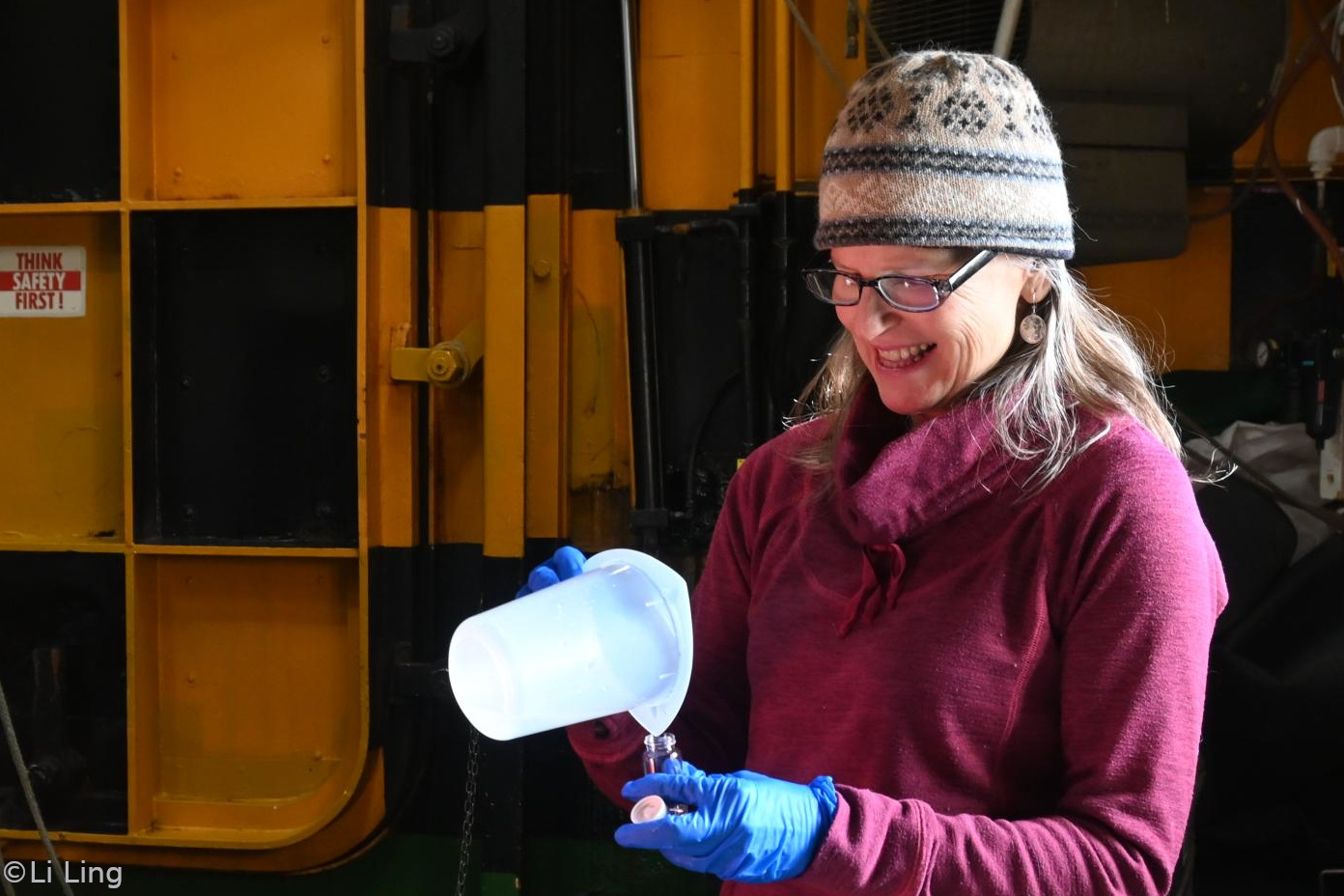 Sharon from ARTEMIS receiving the remaining water from Laura (Sharon analyses the water for O18, a heavier oxygen isotope) 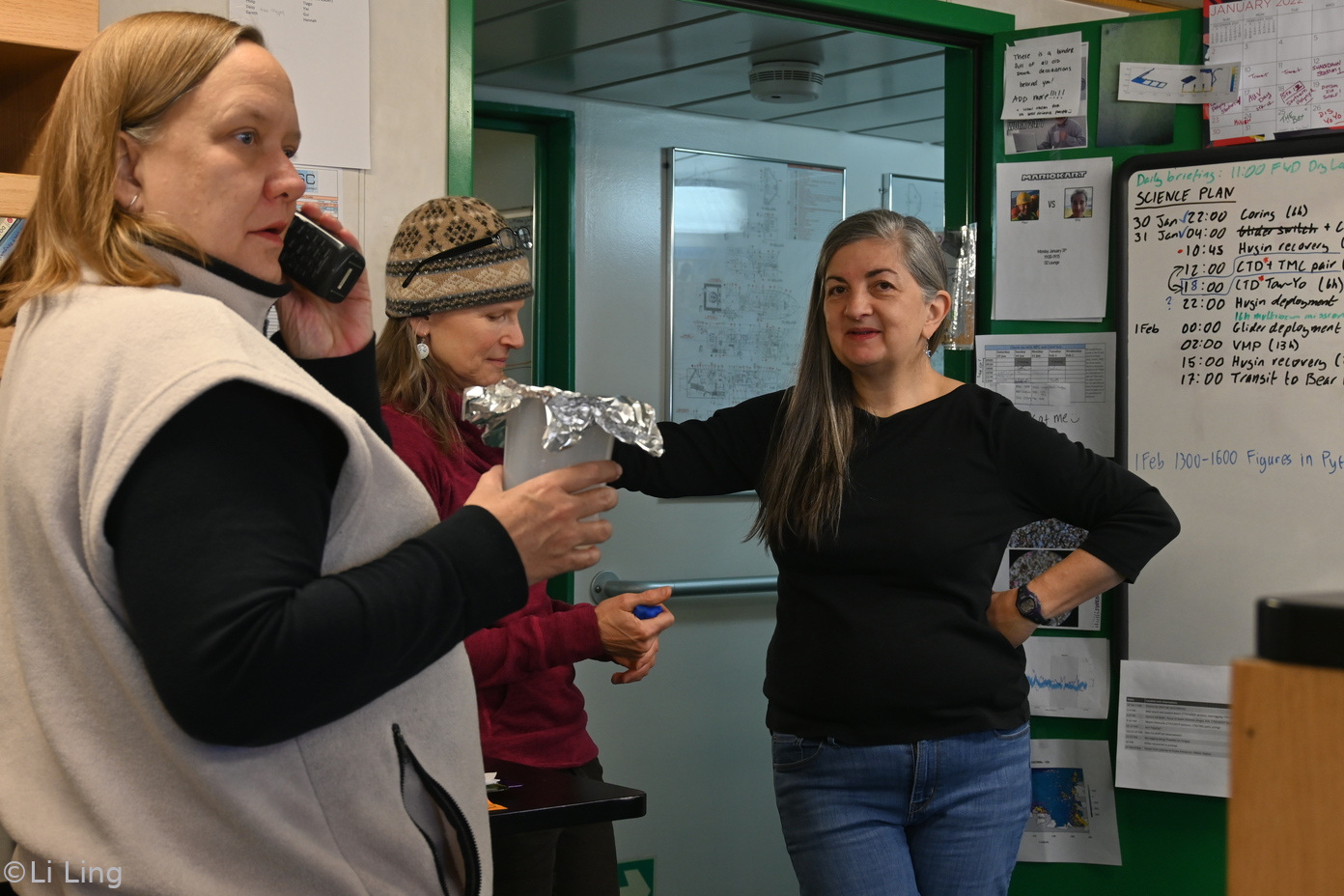 The remaining water went to Julia from THOR, who filters the water for particles (People from left to right: Julia, Sharon and Tish)